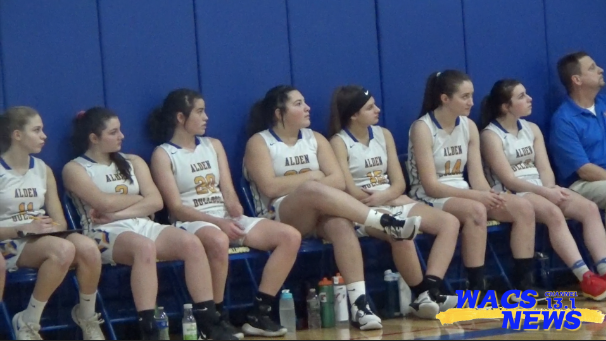 The girls varsity basketball team squared off against two teams over the weekend in the annual Alden Girls Tip-Off Tournament. They are coached by, Mr. Lance Cayea. The team played exceptionally well here at home and kept their hot streak alive in front of their fans. The varsity girls basketball team is led by returning senior captains Allie Petschke, Grace Pastuszynski, and Haley Tyburski. The team also has several juniors on the court that contribute heavily to the team. Grace Pastuszynski in particular had a great tournament, including a highlight reel performance against the Royhart Rams. I got a chance to talk to Allie Petschke and hear her thoughts on how the Tip-Off tournament went. She talked about several aspects of the team including the leading point scorer in the tournament, team bonding, and what she is looking forward to this season. The girls have several key games coming up in the next few weeks including matchups against Newfane, Eden, Pioneer, Cleveland Hill, Holland, and Lackawanna. These upcoming games will be a challenge for the girls, but, they are well prepared. The team has been a very impressive this year. We are all looking forward to watching them play. Go Bulldogs!